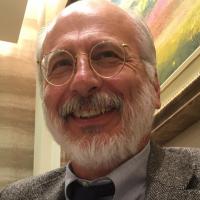 1993-2000:   Associate Professor of Histology, School of Medicine, University of Siena.

2000-date:    Professor of Histology, School of Medicine, University of Siena.

BIBLIOMETRIC DATA according to Scopus

Vincenzo Sorrentino is an internationally recognized scholar mostly known for his work in the field of molecular cell biology and genetics of skeletal muscle cells. In the last years, his research activity has mainly focused on three main topics.

1) Molecular basis of the assembly of the junctional protein complex at triads.

Following the discovery by his team of the third ryanodine receptors gene (RYR3), Prof. Sorrentino has been interested in the characterization and the assembly of proteins of the excitation-contraction coupling mechanism, like ryanodine receptors, triadin, junction, junctophilins and calsequestrin in skeletal muscle. These studies show how protein-protein interactions mediate the assembly and the stability of a large multiprotein complex around the RYR1 at triads. In recent studies, Prof. Sorrentino and his team identified the molecular determinants by which junctophilins mediate the formation and stability of triads in skeletal muscle.

In 2003 his team provided the first evidence that an interaction between two proteins, sAnk1.5 and obscurin, stabilizes the sarcoplasmic reticulum around the myofibrils. Additional studies, mainly based on the characterization of knock-out mouse lines lacking either AnkB, sAnk1 or obscurin confirmed the role of muscle-specific ankyrins and obscurin in sarcoplasmic reticulum architecture and the stabilization of the M band and of dystrophin at costamers.

Many of Prof. Sorrentino’s studies have been dedicated to genetic studies aimed to identify the pathogenetic role and the mechanisms altered by mutations in genes encoding proteins of the excitation-contraction coupling in human diseases like Malignant Hyperthermia and Central Core Diseases. In the recent years, Sorrentino provided the first evidence that mutations in the CASQ1 gene are found in patients with Vacuolar Aggregate Myopathy and in patients with Tubular Aggregate Myopathy. More recently, his group identified the first causative mutation in the obscurin (OBSCN) gene in a family with a form of distal myopathy.