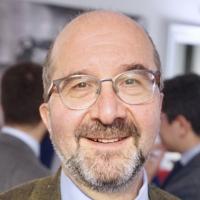 I am a professor of Political Science at the University of Siena, Department of Social, Political and Cognitive Sciences. I have been director of the Ph.D Program in Political Science - Comparative and European Politics from 2006 to 2008 and head of my department from 2013 to 2017. I am now delegate to the five years Project of excellence granted to our Department by the Italian Ministry of the University in 2018 (https://interdispoc.unisi.it/en/).

My research interests focus on public opinion and foreign and security policy, Anti-Americanism, European integration and deliberative theory and the role of deliberative polls in studying attitude change. I am also interested in forecasting methodologies, with particular reference to applications of Delphi method and scenario building.

I am now busy with a couple of research projects. One, related to the Department of excellence five years grant, is a panel study of Italian public opinion over the period 2019-2021 about populism, precarization and multilingualism that involves also media content analysis and the passive media consumption of respondents. The other is a project financed by Volkswagen (and coordinated by the University of Mannheim in collaboration with Exeter, Siena and Strathclyde), on European security issues comparing elite and public attitudes with a three waves panel survey in four countries (France, Italy, Germany and the United Kingdom) (http://www.seceurity.eu/) over the period 2019-2021. I also collaborate regularly with PRIMA, Partnership, Research  and Innovation in the Mediterranean Area (http://prima-med.org/) and its secretariat in developing scenarios for the future of the agri-food sector in the Mediterranean area.

I have been publishing several books, articles and chapters on topics related to my research interests. You can find some of them at European Journal of Political Research, European union Politics, European Security, Italian Political Science Review, Journal of Conflict Resolution, Political Psychology, Public Opinion Quarterly and Research and Politics. From time to time I report some of my research results in AffarInternazionali, Monkey Cage, the EUROPP blog website of the London School of Economics and Il Mulino online.