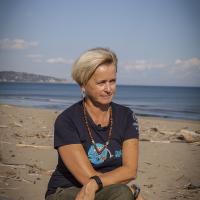 Maria Cristina Fossi is Full Professor of Ecology and Ecotoxicology at the University of Siena (UNISI) and since 2000 is Scientific Director of the Biomarker Laboratory (CIBM). She gave a key contribution to the development of the biomarker approach in terrestrial and marine ecotoxicology. Her research has focused on: development of biomarkers in bioindicators for off-shore and on-shore oil extraction (ENI-IT), evaluation of endocrine disruptors in marine species, assessment of cetacean ecotoxicological status in Mediterranean Sea, Gulf of California, Indian Ocean, investigation on presence and effect of microplastics and plasticizers in Med ecosystems. Since 1991 she developed innovative diagnostic tools for ecotoxicological assessment of threatened species (marine mammals, birds, reptiles) bringing to the establishment of methods (non-destructive biomarker approach) currently acknowledged as golden standard at the international level. Thanks to her work on skin biopsies, she is a world reference for the assessment of ecotoxicological risk in cetaceans. Since 2001 she published the first papers on effects of on Endocrine Disruptors in Med marine top predators. In 2012 she provided the first evidence worldwide on the effects of microplastics on baleen whales. She is author or co-author of over 800 scientific papers (articles and review articles (250), chapters (29) and books (6), abstracts in national and international conferences (over 355). She is involved in several International Scientific organizations (e.g. Past-president of SETAC Italian Branch, SC International Whaling Commission, SC Pelagos Sanctuary, SC ACCOBAMS, Member of CORMON UNE/MAP). Her lab (10 researchers) has a central position for research on marine litter on Med and a key role in the implementation of the EU MSFD at national level (D8-D10) and IMAP Indicators (UNE/MAP). She has been panel member for evaluation of EU projects (eg. BONUS) and international institutions (eg: MISTRA (Sweden), Barcelona Convention, CIEMS, etc). During her scientific activity she coordinated 30 research projects at national and international level, including 13 projects on the impact of plastics in marine environments. She participated as PI at 65 research expeditions in the Mediterranean, Chile, Argentina, Mexico and Australia. From 1983 onwards she has tutored/supervised about 110 master and PhD students. She has been involved in the organization of more than 24 International Conferences and in more than 70 Conferences as Invited speaker.  In the field of marine litter, she has been the scientific coordinator (PI) of the "Plastic Busters"(PB) project elected as Flagship Project of Med-SDSN since 2013. The project, devolved to monitor and mitigate the impact of plastics in the Med, was labelled in 2016 from Union for the Mediterranean and financed in 2018 by Interreg MED EU Programme – Plastic Busters MPAs. PB was elected in 2019 as flagship project for the “BLUEMED Pilot for a Plastic free healthy Mediterranean” from EU. She is the WP3 coordinator of the COMMON, ENI-CBC project. In 2019-20 she has been the PI of the FEAMP Project AdriCleanFish supported by MIPAAF. She is involved in an intense scientific communication and dissemination activity on the topic of the effects of microplastics on biodiversity (including endangered species): media (RAI, SKY, BBC); magazines (La Repubblica, Corriere della Sera, The Indipendent, The Guardian, etc.); web and films-“A Plastic Ocean” (https://plasticoceans.org/about-a-plastic-ocean/), PlasticBusters-SkyTG24 (https://guidatv.sky.it/programmi-tv/attualita/plastic-buster/22760d06-5561-4c6a-abfe-7e31951556c9), Odissea di Plastica- Sky) - Sky (https://tg24.sky.it/ambiente/2020/07/03/odissea-plastica).