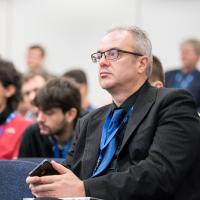 Roberto Giorgi is an Associate Professor at Dept. of Information Engineering, University of Siena, Italy.

• He has received the eligibility (Italian National Abilitation) as Full-Professor since 30th March 2018.

• For one year, he was Research Associate at the University of Alabama in Huntsville, USA.

• He coordinated the European Project AXIOM (3.9Meuro cost, 2015-2018, 7 partners), about designing and manufacturing the next generation board for Cyber-Physical Systems.

• He coordinated the TERAFLUX project (8.5Meuro cost, 2010-2014, 11 partners) in the area of Future and Emerging Technologies for Teradevice Computing.

• He is member of the HiPEAC Network of Excellence (High Performance Embedded-system Architecture and Compilation) since 2004.

• He was Deputy Steering Committee in the HiPEAC, Application leader in the ERA project (Embedded Reconfigurable Architectures), participated to SARC (Scalable ARChitectures) and attracted more than 3 Million Euro of Research Funding to the University of Siena in the last decade.

• He took part in ChARM project, developing software for performance evaluation of ARM-processor based embedded systems with cache memory.

• He has been IEEE Judge for the IEEE-CSIDC (Computer Society International Design Competition).

• He led the project ”Bluesign Translator”, which received a 5th worldwide prize by IEEE and top companies, and received the FORUM-P.A. prize by the Italian Ministry of Technological and Scientific Innovation, as absolute winner in the category of “actions for the social integration of disadvantaged people through ICT”.

• He has been selected by the European Commission as an independent expert for evaluating ICT European Projects.

• He is co-author of more than 110 scientific papers.

• He is a Lifetime member of ACM and a Senior Member of the IEEE, IEEE Computer Society