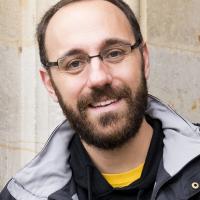 I am Carles Noguera i Clofent, logician, mathematician, philosopher, researcher, professor. I obtained degrees in Mathematics (2001) and Philosophy (2007) in the University of Barcelona. As a doctoral student of the Artificial Intelligence Research Institute IIIA-CSIC, I worked under the supervision of Francesc Esteva and Joan Gispert, and obtained a Ph.D. in Logic and Foundations of Mathematics (2006) with the title again awarded by the University of Barcelona.

After that, I worked as a lecturer at the University of Lleida (2006-2007), as a postdoc at the University of Siena (2007-2009) under the supervision of Franco Montagna, as a contracted researcher at the Artificial Intelligence Research Institute (2009-2012), and as a scientist in the Czech Academy of Sciences, in Prague (2013-2021, with the highest tenured position since 2018).

Since 2022, I am back to the University of Siena, as a member of the Department of Information Engineering and Mathematics.

For more information, you can visit my personal website.